Your memories preserved for the future!

Birth, marriage, birthdays, holidays, trips and so on. Dear memories that you want to keep, relive or pass on to family, children and grand children.

We can make these precious videos with memories for you digital so that they can easily be viewed again. For this we use the best film scanners. The images are converted to a digital file, so that they can be viewed via, for example, the television, computer, tablet or smart-phone.

We have a broad experience and extensive portfolio. Together with our team we provide a personal and professional environment where the coffee is always there for you! 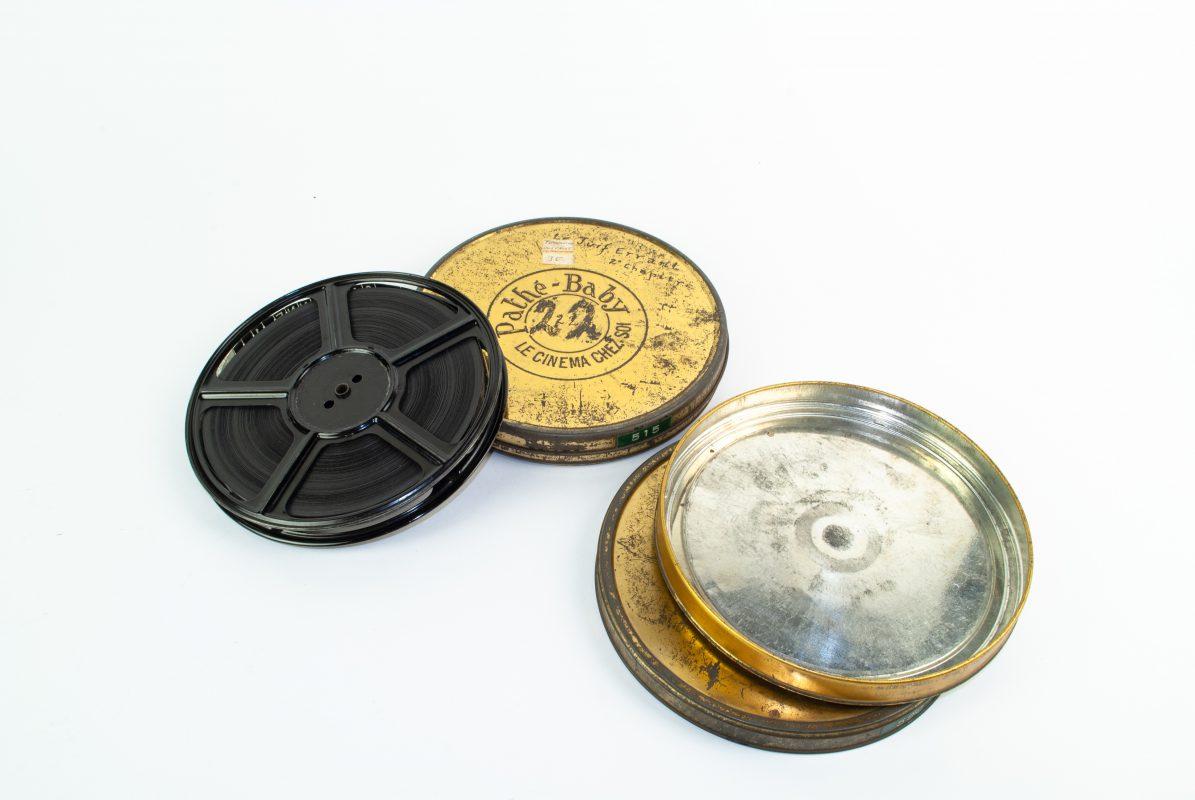 All prices are including 21% VAT and subject to change. 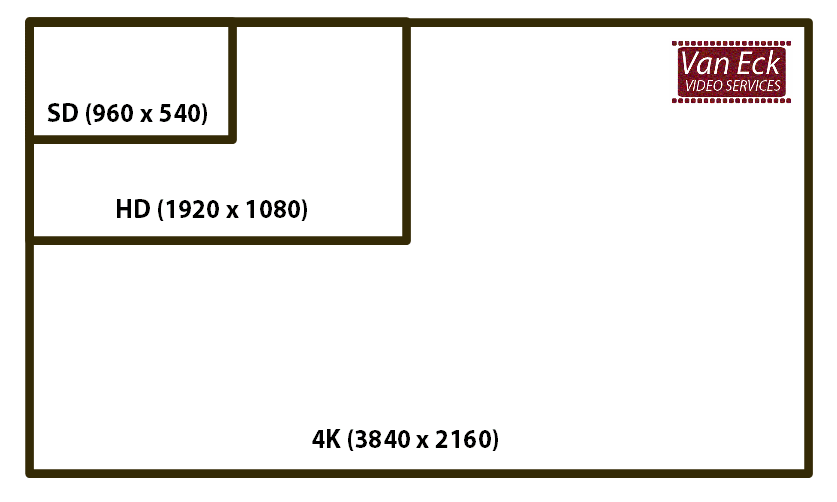 When digitizing your films, you can also opt for image improvements. This corrects the images for brightness, image stabilization, colors, sharpness, noise, dirt and stains. Making the result more beautiful. See the example scans below for examples. We charge a subcharge of €0,75 per minute.

If the films to be scanned have stains caused by moulds, we can specially clean the films. With our mould cleaning machine we can remove between 85% and 100% of the stains from the films. See the example scans below for examples. We charge a subcharge of €2,25 per minute.

Choices in film crops
The film scanners we use, can scan the entire film image. No information/edges are lost during scanning.
You can choose from:
By default we deliver the films as Matted. 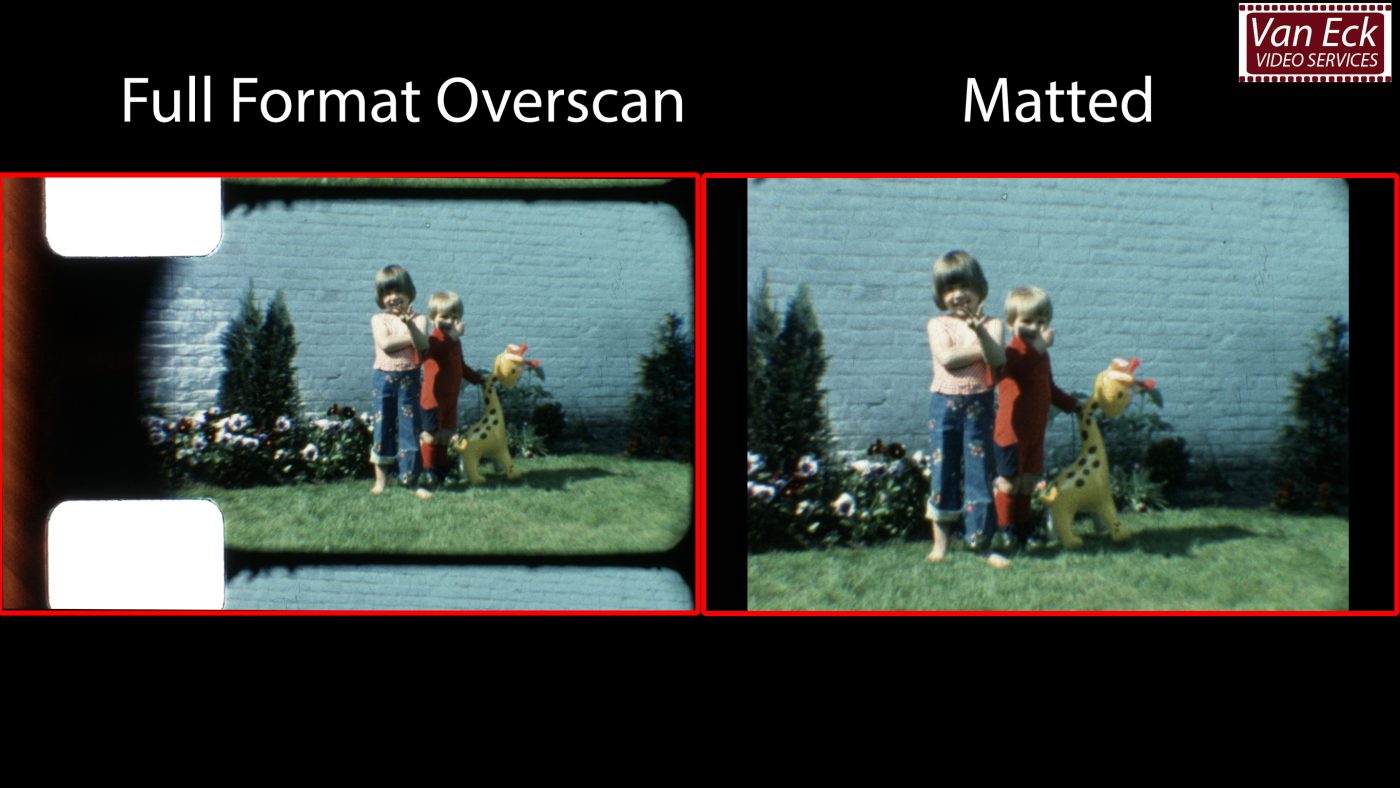 Difference with and without wetgate

Difference HD/SD with and without image enhancements

Difference HD/SD with and without image enhancements 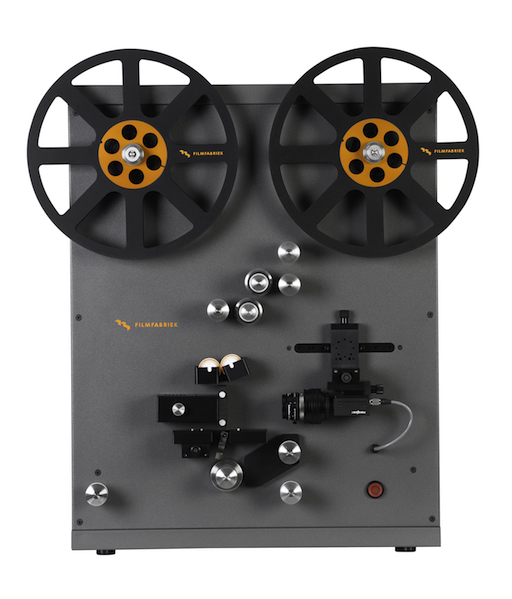 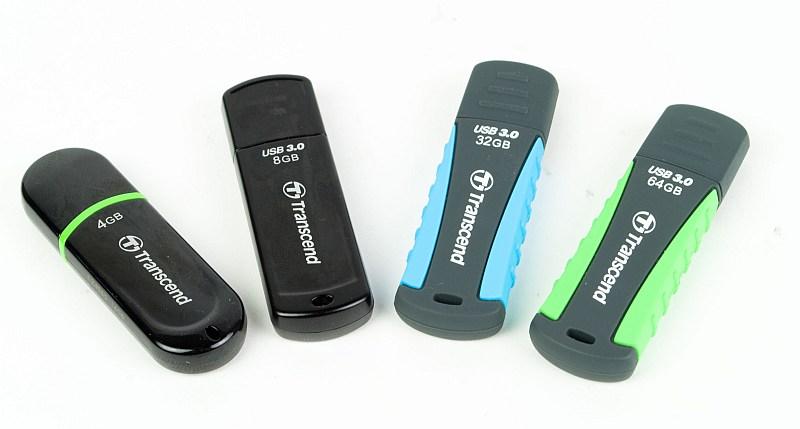 Could I request a sample scan?

Yes, that is possible. You can request your free sample scan here.

Can I still edit the digitized film (or have it edited) afterwards?

Yes, you can edit the film yourself. More info: Editing video files – with free software.

We can also do the editing for you. In consultation we can change the order of films, cut out pieces, add music, etcetera.

When copying large files I get an error message

The problem when a large video file cannot be copied is usually that the file system of the hard disk or USB stick is still in FAT32 format. Files larger than 4GB cannot be stored on a FAT32 volume. Formatting the flash drive in the exFAT or NTFS file system will solve this problem.

You can find more information about this:

Does it pay to put my own movies on DVD?

It is possible to digitize your 8mm films yourself. However, the quality achieved is considerably less than if it is done professionally. For more information on how to transfer your own films, see our page about digitizing your own films.

What to do with soured films?

That is definitely a risk. When a film is soured (acetata decay, vinegar syndrome) the substance “acetic acid” is released (smells like vinegar). This substance can affect other films. Cleaning films with vinegar syndrome does not help.

The decay of the film can be slowed down by storing the film in a cold place (preferably in the freezer). Special bags can also be placed in the film cans to slow down the acidification process: Kodak Molecular Sieve.
It is best to copy or digitize this film directly.

What kind of cine film do I have?

Can I rent a projector or movie viewer so I can watch which films I want to digitize?

Yes, you can. We rent and sell film viewers and film projectors.

How many minutes of film are on my reels?

Click here for the complete table with the duration of films (Dutch).

USB stick is not working on TV

Sometimes a USB flash drive with video files does not play properly on a TV.
If this is the case, please contact us. Please provide the TV brand and type number, then we can solve the problem for you.
If you are technical, you can often solve the problem yourself. Here are some tips:

By default, we deliver digitized film in .H264 format. This format is the defacto standard for video. If you want to perform heavy edits such as color correction etc. yourself, we recommend Prores. Read more: http://van-eck.net/en/video-codecs/

Editing digitized video and movies – what programs can I use to do that?

There are several ways to edit digitized videos and films yourself.

For cutting and pasting only, I recommend LosslessCut.The advantage of this program is that the video does not need to be re-encoded and thus no quality is lost. If you want more, such as adding titles, music, transitions, etc. then you need a somewhat more comprehensive program. See here for my top five recommended free video editing programs:

If you have even more requirements, then a paid program is recommended. Some examples: Final cut pro (Apple) and Adobe Premiere / Magix Video for the PC.

By default, when you download to your c:disk. There is not always enough room there.

In the browser you use, you can set to download to another partition or drive (e.g., external hard drive).

Herewith tips to adjust this setting:

How do I recognize mold on my film?

See the film clip below for this:

If the films to be scanned have stains caused by moulds, we can specially clean the films. With our mould cleaning machine we can remove between 85% and 100% of the stains from the films.

Note: Mold cannot be removed from movies with film cleaner!

Mold is often found on Agfa films, but sometimes on other brands of films such as Kodak or Fuji.